This knot represents the Arrow of Light award--the highest award in Cub Scouts, and the only Cub Scout award with an associated square knot. Only adult leaders wear the square knot. 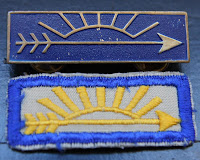 The youth award is a patch worn below the left pocket. It is the only Cub Scout award that can be worn on the Boy Scout uniform. There is also a metal pin version, which can be worn instead of the patch, in the same place.

This knot represents the Youth Religious award. This is an interesting one in Scouting, because the religious awards are not Scout awards. They are awarded by a religious group, and each church/denomination has their own version with their own award. The BSA recognizes these awards and allows youth and adults who have earned the award to wear this square knot. More information about the BSA's religious emblems program can be found here.

Many churches have different religious awards for different age groups. These can be represented by miniature pins worn on the square knot. You'll notice I have two miniature pins here. One for Cub Scouts, the other for Boy Scouts. 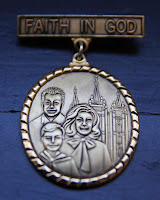 As a Cub Scout in The Church of Jesus Christ of Latter-day Saints I earned the Faith in God award. This medallion was discontinued in 2001. With recent changes in children and youth programs in the church, it is unclear what religious awards will be available for church members who continue as Scouts. 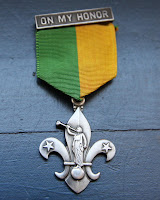 As a Boy Scout I earned the On My Honor award. This is still available through December 2019, but with recent changes in children and youth programs in the church, it is unclear what religious awards will be available for church members who continue as Scouts. 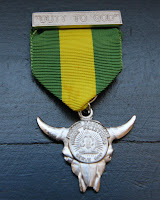 I also earned the Duty to God award as a young man. At one time, this was the religious emblem recognized by the BSA. However, in the late 1970's, this became strictly a priesthood award and the On My Honor award became the recognized religious emblem with the BSA. That means mine isn't a recognized Scout award, but I like to include it here anyway.

This square knot represents the Eagle Scout award. I sometimes wear my gold eagle palm on the square knot in the same way I wear the miniature pins on my youth religious knot. 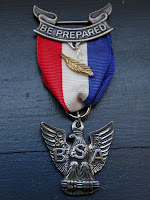 One of my uniforms has this knot in place of the regular Eagle Scout knot. It represents my lifetime membership to the National Eagle Scout Association. The knot is the same but has a silver border.

This knot represents the Venturing Leader's Training award. Each scouting program has a similar award that uses the same medal and square knot, so the specific award can be represented by a miniature pin, indicating the program in which it was earned. 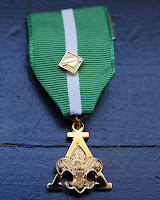 Requirements for the different training awards can be found here.

This knot represents the Adult Religious award. For The Church of Jesus Christ of Latter-day Saints, that is the On My Honor award. While very similar to the award available for youth, the adult version is a ribbon worn around the neck rather than a pin-on medal.

This knot represents the District Award of Merit and is the only knot award that isn't a square knot. I don't know the reason for that.

This is the Silver Beaver. Like the District Award of Merit, this is an award that is "awarded," not "earned." I often wonder if I have really done enough to deserve it, but I take comfort knowing that someone thought I did enough to nominate me.

Other Awards and Recognitions 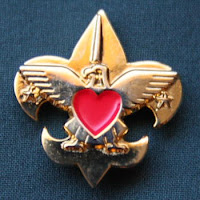 This pin is not the only award available in the Heart of Scouting program, but it is the only one leaders can earn.

More information about this program can be found here.

The Certified Master Trainer award was created by the Utah National Parks Council. I once heard someone say that this award doesn't necessarily mean you are a better trainer than others, it just means you met certain requirements. Those included staffing Wood Badge, staffing a Trainers EDGE course, and other stuff. 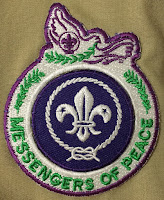 The Messengers of Peace Award. I really like this one. An initiative of the World Scouting organization, this one promotes the idea that serving others can make the world a better place. Find more information about it here and here.

There are other "ring" patches out there to surround the world crest but, in my opinion, this is the only one worth having. 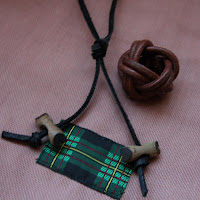 Wood Badge (or, as one of my youth once called them, "beads of wisdom."). I attended in 2009 (WE7-591-12-09) and finished my ticket in June of 2010. Of all the things I have done in Scouting, this was perhaps the most meaningful to me. And I think it, more than anything else, helped me make more of a difference for my young men.

I earned a third bead by serving on staff.