I was able to attend an Eagle Court of Honor yesterday afternoon. It was wonderful. It was formal and dignified. In my opinion, it was just what that occasion should be.

We have quite a few boys in our ward who seem to have lost interest in Scouting as soon as they turn 14 or 15. Part of that, I think, is the chronic lack of leadership we have had in that age group. Between leaders who haven't pushed Scouting, and other influences, many of our young men just decide not to keep going.

This particular young man was in that same boat. Until last summer. He had some friends who convinced him to be on staff at the High Uintah camp. He spent two weeks on the mountain immersed in Scouting. He saw what it was supposed to be like. And he fell in love.

Upon coming home he went to work. He earned the Religious Life Bronze award in our Venturing program. He finished his Eagle project. He is on-track to finish the Venturing Gold and Silver awards within just a few months. He has really grown.

At his Court of Honor yesterday he asked me to present the award to him. And then he surprised me by giving me his Eagle Mentor pin. I thought he might give it to one of the people from his High Uintah camp staff. I thought they probably had more to do with his finishing Eagle than I.

I believed I have worked hard to make a difference here. I knew I had made progress. But I didn't expect to be honored in that way. 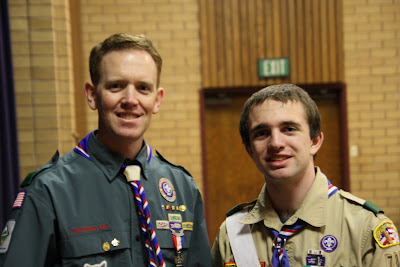 I suspect that yesterday's Court of Honor will also push a few more of our young men into finishing their work. I think they liked what they saw. I think they saw something they wanted to be a part of. Hopefully, we'll be doing a few more of these things soon.
Posted by Tory at 7:27 PM