How's this for a wild idea?

I have a really crazy idea. It has been floating somewhere in my mind for over a year now. I've thought several times about posting it here but for some reason I haven't. Maybe it's because things have slowed down for me (Scouting-wise) that I finally decided to do it.

Keep in mind this is just an idea. I'm not suggesting we actually do this, or that it will ever happen. It's just an idea. However, I think it has some merit (as well as a few flaws).

Essentially, my idea is a complete restructuring of the advancement picture. I'll get to the details in a moment, but if this idea were to be implemented, it could be the biggest change to Boy Scout advancement since... well, since the founding of the BSA.

The Inspiration
Before I get into the details, let me explain some of the inspiration for this idea. Some of it comes from the largely non-linear advancement structure of the Venturing program. (See this post to see what I mean.) Part of my idea would be to re-structure Boy Scout advancement to use this idea.

Another inspiration for me was Robert Baden-Powell's initial idea for advancement. If my memory is correct, he had only two ranks--Second class and First class. Anyone who had not yet passed the second class test was considered a Tenderfoot and not a true scout.

A third inspiration for this idea was the original structure of advancement for the BSA. In 1911, the star, life, and eagle awards were not ranks. They were awards for earning merit badges. Furthermore, a boy could earn Eagle without ever earning Star and Life, depending on which merit badges he chose to earn.

Another inspiration is the idea expressed in this post on the Scoutmaster Minute blog, about getting all scouts to First Class, not necessarily Eagle.

The Idea
By now, you're probably getting some idea of what I have in mind. I would take Star, Life, and Eagle and change them from ranks back to awards. Since these would not be ranks, the award would be changed from a patch (for star and life) to a medal. We'd also have to eliminate the Eagle patch, keeping just the medal.

I would keep the linear structure of the lower ranks, but I'd eliminate the Scout badge. I would make Tenderfoot the "joining" rank and spread the current tenderfoot requirements across the second and first class ranks. That would make First Class the highest rank in Boy Scouts:

I would then eliminate the linear structure for the higher awards. I would make Star, Life, and Eagle be more like the Venturing awards in that a boy could work on any one he wanted, based on his interests. That would mean each one would have a specific focus. This would require changes in requirements and I haven't worked those out because this isn't a serious proposal--it's just an idea.

In 1911, the Life badge was focused on "life." In order to earn it, he had to earn five specific merit badges, each relating to life: First Aid, Athletics, Lifesaving, Personal Health, and Public Health. I would keep this same idea for the Life award. It could be an award for earning merit badges in the area of health, medicine, lifesaving, etc. It would be an award option available to those boys interested in the health and medical field.

The Star award, I think, could be made to serve those boys with interests in the sciences. Merit badges could include those like environmental science, chemistry, astronomy, nature, etc. Actually, there is a possibility of separating the physical and natural sciences/conservation and making two awards (star and ???)

Speaking of additional awards... there could be several. They could be modeled after the Venturing program's areas of outdoors, sports and fitness, arts and hobbies, and religious life, or they could be developed specifically to address any grouping of similar merit badges (business and trades, communications, citizenship, etc.) or both. The awards would require a boy earn from 5-10(?) merit badges for each, with the possibility of some additional tenure, service, leadership, or practical experience requirement)

Of course, the Eagle award would have to maintain it's place as the highest award available to Boy Scouts. It's always been that way and it should stay that way. I would suggest that Eagle maintain it's list of required merit badges, leadership, and service requirements (except the time of service would be counted "as a First Class scout" rather than "as a Life scout"). I would maintain the Eagle as an award for "the all-round perfect scout" as it was described in the 1911 handbook.

My overall advancement scheme would look something like this: 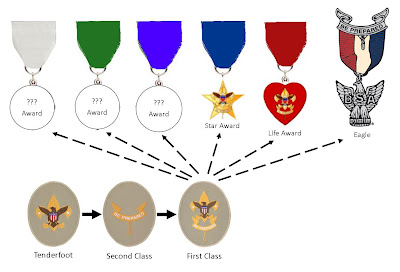 Notice that the first three ranks would be linear. A boy would progress from a Tenderfoot upon Joining to a Second Class Scout to a First Class Scout. Any First Class scout could then be eligible to work on any of the awards he wanted, according to his interests. Even after earning Eagle, a boy could continue to work on one of the other awards, again, according to his interests.

The Consequences
If you have gotten all the way to here, chances are you've asked some form of the question "why should we do this?" Well, I'm not really suggesting that we should. It's just a wild idea I had. I would like to pose another question, however. What would happen if we did change the Boy Scout advancement to something like this?

I think we would lessen the obsession some people have with advancement. You've probably met those who see advancement as the end goal of Scouting rather than one of the methods. The structure I outlined here would maintain advancement as an important method but might lessen the possibility of obsessing over advancement to the detriment of other methods.

It would do this in a couple ways. First, by making First Class the highest rank, and having several awards essentially on the same level, it could shift the focus from earning Eagle, to helping boys learn the skills they need to make it to First Class.

Second, since the awards structure at the top isn't linear, a boy isn't finished once he earns Eagle. He can continue working on something else. It emphasizes that the journey isn't over--that there is more to do and more to learn.

Another effect to this type of structure would be to enhance and extend the effect of earning merit badges. One of the purposes of merit badges is to introduce boys to interests and career opportunities. If a boy works on a merit badge and decides he likes that general field, having another, higher award related to it could encourage him to pursue it further. I think it could put the emphasis on learning rather than on earning.

It could also help maintain the interest of older boys, either by giving them something cool to work on after Eagle, and/or by helping them find career interests.

Of course, it's entirely possible that none of those things would happen. Maybe this idea would be a complete flop. What do you think?
Posted by Tory at 12:12 PM