Like almost everyone else, we had our Scouting for Food drive this past weekend. We were able to collect 584 lbs. of food for our local food bank. 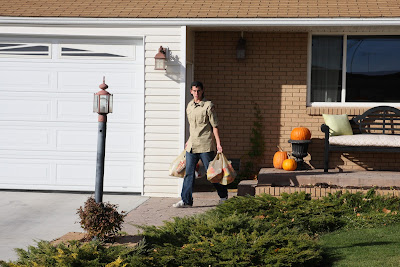 We went around on Wednesday evening and delivered bags to the houses in our ward. The cub scouts helped us out by going around earlier in the day. On Saturday morning we went around to pick them up. We only had one young man show up to help. Apparently there were a lot of other things going on that day. At least he wore his uniform without being specifically asked or reminded. (Now if only we could get a few patches sewed on. And a neckerchief.)

After we dropped off all our food, and I took our Scout home, I noticed a house with a bag sitting on the porch. I decided to go around again to see if anyone else got their donation out late and ended up getting another 20 lbs. of food.

I got talking with another Venturing leader later that day who reported they were able to collect 997 lbs of food. I don't know if our unit has ever collected quite that much, but I do know we got over100 lbs more last spring.

So, what is the secret to getting lots of donations? This other Venturing leader said they went out Saturday morning and knocked on doors, asking for donations, saying they would be back an hour later to pick them up. He was convinced this approach worked better. But we tried it that way last fall and I'm not sure I liked it. It seemed to take a very long time and we ended up with about the same as we got this year. Last spring we tried delivering the bags on Wednesday and picking them up on Saturday morning, and we ended up with 100 lbs. more food than the previous outing. But this time it just didn't work.

That's not to say that I'm not pleased with what we were able to contribute, I just wish we could have done a little more.
Posted by Tory at 2:07 PM