During Wood Badge, both as a participant and a staff member, I noticed that one of the more popular presentations was about the Stages of Team Development. This one really seemed to affect people

I’ve just been going over the Introduction to LeadershipSkills for Crews course, preparing to teach it to my young men in March. One of the sections there is about the stages of team development. Reading through it reminded me of something I’ve been meaning to put together.

I think I actually got a more complete understanding of this concept from the ILSC than I did from Wood Badge (blasphemy, I know!).

At Wood Badge, the topic is introduced using clips from the movie Remember the Titans. It’s great, and probably one of the reasons it is so memorable and has such an impact.

At ILSC, you begin not with a team, but the progression of an individual. I’ll use myself as an example.

When I was first called as the Venturing Advisor, I was pretty excited. I thought it would be a really great calling to have and was looking forward to it. My enthusiasm was pretty high. But I didn’t know anything about Venturing. My skill level was low.

(The relationship between enthusiasm and skill level becomes an important part of the stages, pay attention to it.)

As I started to learn about Venturing and get into things, my enthusiasm started to drop. I still didn’t know much about Venturing or how to do it (skill level still low, but slowly increasing). Furthermore, it seemed like nobody new anything about Venturing. Our ward YM president even told me he didn’t care about Venturing. I had only one boy who would come to activities (hard to do much with one boy…) and he almost never talked. And when he did, it wasn’t ever serious. (Example: he suggested our crew uniform should be a loin cloth.) It was maddening. The more I tried, the more I seemed to fail. I got discouraged. Round table, for me, became a therapy session more than anything. My enthusiasm and skill level were both low.

Eventually, I started to get better. As my skills improved, through training, round table, and Wood Badge, I started to make progress. I got more boys and was able to implement more activities. I got them out of the gym and away from the basketball. I introduced the Venturing awards and even saw some interest. My skills were improving and my enthusiasm started to go back up.

Now, ideally, a person will get to a point where their skills are high and things are running smoothly. Their enthusiasm, likewise is high.  I say ideally because, to be honest, I don’t know that I’m there yet. I know enough about Venturing to know everything we’re doing wrong. And I’m not sure I have the skills (or have used them well enough) to get things there. It’s still a struggle. I’d like to do better. For illustrative purposes, though, we’ll say I’ve made it.

Before we go on, let’s chart the progression I’ve just described. We’ll plot my progress on a chart with skill level on the X axis and enthusiasm on the Y axis. This graph is of my own making and is not found either in the ILSC or at Wood Badge. I came up with it after studying the topic for ILSC. 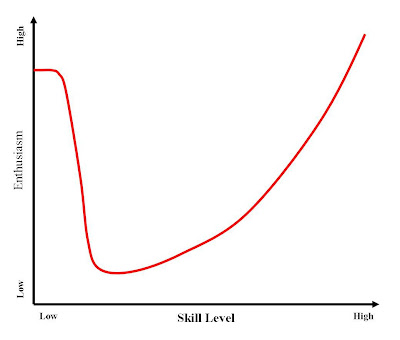 Teams actually go through the exact stame stages as they develop. At Wood Badge we name the stages: Forming, Storming, Norming, and Performing. Let’s show them on our graph: 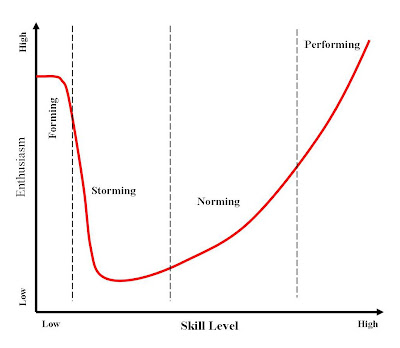 The divisions here probably aren’t exact, but you get the point.

As a team starts out, everyone is excited and has high enthusiasm, but their skill as a team is not very high. Individual team members may be wanting to go in different directions. This is the Forming stage.

Sooner or later, those different directions clash. This is the Storming stage. Enthusiasm drops and skill level (as a team) is still pretty low.

Eventually, things start to turn around. The team gets better at working together and start to coalesce around a common goal. Enthusiasm and skill level are both on the rise. This is the Norming stage.

In the Performing stage, the team starts performing. They have come together. Their collective skill level is high and their enthusiasm is once again high.

Now, a couple important points. There is no time frame on here. Forming and storming could happen very quickly or take a long time. Also, teams (or individuals) don’t always stay in the performing stage once they get there. Team membes get adjusted and the team might slide back to Storming. An individual might get complacent and forget some of his training (or abandon it altogether) and performance could suffer, pushing him back to a different stage. These stages are flexible.

This is where leadership comes in.

Remember the Teaching EDGE? That’s the different steps we use to teach a skill: Explain, Demonstrate, Guide, and Enable.  Well, there’s also the Leading EDGE. It helps leaders understand how to adjust their leadership styles in response to the stages of team development. Wood Badge teaches this, but being separated from the stages by a whole day, I wonder if it gets lost. ILSC combines to two into one lesson.

Basically, each leading style (Explaining, Demonstrating, Guiding, and Enabling) corresponds to one of the stages of team development. Like this: 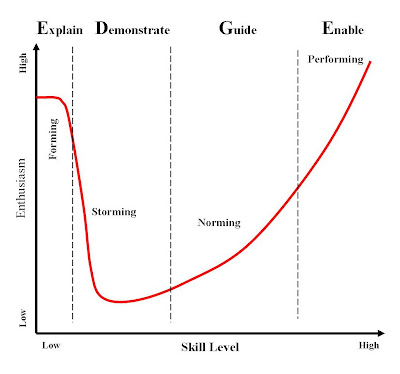 Starting out (Forming), a team (or individual) often needs a leader to Explain exactly what to do and how to do it.

In the Storming stage, it is often better for the leader to Demonstrate. The team knows what needs to be done, but the leader can help by showing them how to do it.

As the team starts to come together (Norming), the leader can begin to back away and Guide the team in accomplishing its tasks. They coach the team in taking charge of the effort. This is exactly what happens with individual patrols and their troop guide at Wood Badge, and it should happen with our individual units.

Once they are performing, the leader should Enable the team to succeed by allowing them to function on their own, using the skills they have learned. At this stage the leader is off to the side and doesn’t interfere with the team’s progress by trying to “help.”

The leader needs to be aware of the progress of the team through these stages and adjust accordingly. If the team is ready to move from Storming to Norming but the leader never shifts from Demonstrate to Guide, I suspect the teams progress will get stuck and they won’t move into the next stage.  Leaders need to allow their teams to move on. I think we too often get stuck in the Explain and Demonstrate stages and too seldom step back to Guide and Enable the teams to perform. Of course, there’s also the possiblility that we step back too soon when a team needs more Explanation and Demonstration, but that’s probably much less common.

It’s a tricky skill to master, and one I personally need to work on.
Posted by Tory at 11:07 AM

Tory
I live with my wife and five children in Utah and am a member of The Church of Jesus Christ of Latter-day Saints. I was a Scout as a boy, but was reintroduced to Scouting as an adult when I was called to serve in the young mens' organization in my ward. I served for 4 years in the young mens' program with the Venturing crew before being called to the Bishopric where I served for about 9 months as 2nd Counselor and Chartered Organization Representative, followed by 2 and a half years as the bishop in my ward. My wife and I spent about 4 years leading of our local Cub Scout Day Camp. Most recently, we started a new family pack in our area. Now I'm a Cubmaster.